On a recent trek in Iceland I had to carry 9 days food, as it was late in the season I wasn't comfortable relying on resupply from the various huts and settlements I would pass through as they could all be closed, I therefore wanted to carry every calorie I would need. I was meticulous in weighing and recording what I took and what I ate – the results are here and I will be using them to inform food planning for future treks.

I hate disclaimers but you should know that I'm not trained in nutrition and therefore I can't say if any of this is appropriate for you, its intended to be an item of interest. I am 57 years old and overweight at 16 stone but reasonably fit, I play squash three times a week and go hill walking about once a month.

Articles I've read mention 3000+ calories per day (depending on the terrain, conditions and individual involved) should be consumed when trekking and a typical days food weighs in at around 900 grams. I walked for seven days and consumed a daily average of 2400 calories, weighing in at an average 616 grams, I also lost 8lbs in weight. I was happy, healthy and didn't feel hungry, or when I did I always had something available to eat. 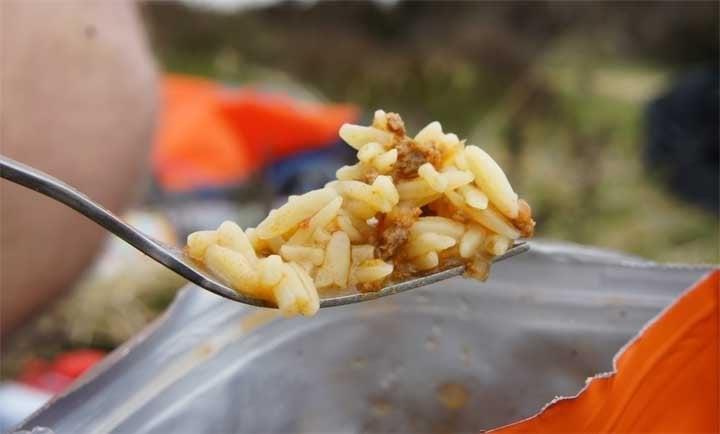 Keeping the weight down

I favour freeze dried meals for backpacking because of their convenience and quality, however they work out quite expensive and you can get foods that have comparable 'Calories per gram carried' more cheaply at a supermarket, the foods to look for are similarly presented – so instant mash, super noodles, dried packet pasta and sauces etc.

Another advantage of freeze dried is that you only need to boil the water and pour it in – that's also true of dried potato but some other 'meals' may require simmering, which use more gas.

You can pack some additional fresh foods to add to any meal and I often take mushrooms, cheese, onion, salt and spices. Tomato puree is another good one. As I was carrying so much food this time around I didn't want to weigh myself down and simply took salt, which I've used to brighten up a bland freeze dried meal on many occasions. I don't like cooking at lunchtime, it may be OK if the weather's great but if it's raining I don't want to be faffing on with a stove etc. therefore lunches tend to be from fresh food anyway. You will see from the accompanying information to this article I had lunch of:

I always have a Cup-a-Soup as a starter and break a few crackers into it to bulk it out. I do this because they are quite tasty, very quickly prepared, reliable and a reasonable calorie count per gram carried. I then follow this up with a main course from the freeze dried ranges which can provide anything from 450 to 600 calories.

It's very rare that I follow this up with a dessert, if I do I normally have to wait an hour or so because I'm not hungry enough. I decided to take five desserts with me to ensure I had enough calories but I returned with three of them and, to be honest while the two I had were OK I would have preferred to have more chocolate bars instead – for example a Cadburys Double Decker weighs about half the carried weight of a dessert and has slightly more than half the calories.

I always end my main meal with a cup of coffee, usually eaten with dessert or a chocolate bar. I discovered FulFil bars on this trip, which are 55 grams and provide at least 200 calories. I found one bar would last a day without any problem and they are very tasty.

Sounds sad but I allow myself 1 mint humbug at the end of each meal.

For two of my breakfasts I brought Expedition Foods 1000 calorie extreme energy Porridge with Strawberries, I included these specifically to enable me to get a big hit of calories if I thought I needed them. I did this because in the past there have been days when I have felt lethargic and weary and I've put this down to 'not enough food'.

I know myself well, half way through Day 6 I was feeling pretty weary despite having been pounding along the previous day, I got to camp around 4pm, set up the tent and immediately made up a 1000 calorie porridge, I managed to eat about 85% of it. I was hungry enough again to eat my usual evening meal at about 7pm.

If I hadn't been walking faster than planned then eating one of my 1000 calorie meals would have left me without a breakfast at the end of the trek, so for the future the emergency meal(s) will be additional meals.

I normally have one of the above and a cup of coffee.

It's worth noting that I used an MSR Windburner stove because of its efficiency, I was so convinced by it that I decided to take just a single 240g gas canister for the full 9 days.

The trek only took 7 days but there seemed to be at least two days worth of gas remaining, I'm convinced it would have lasted the full trek. 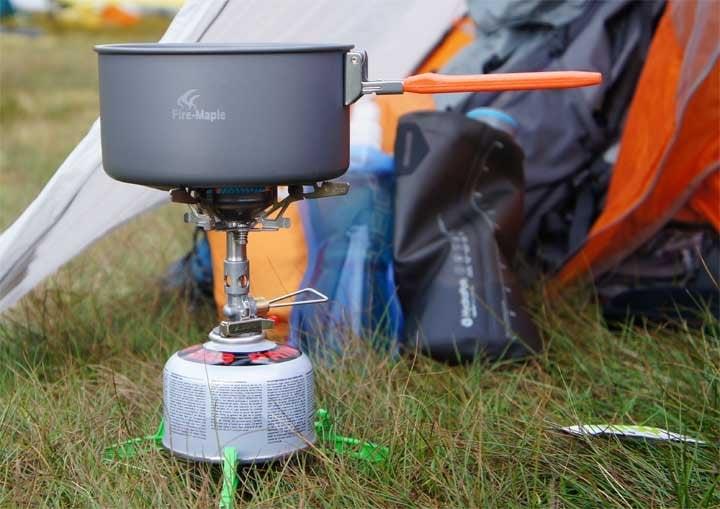 You'll find a full summary of the food story on the supporting information below. It shows that I packed 2400 calories per day at an average weight of 616grams. At the end of the trek, bizarrely, I had exactly two days worth of calories left.

Once upon a time 7 days food was about the limit a person could reasonably carry on top of backpacking kit, but with the advent of ultralight gear its now reasonable to carry much more and be self sufficient for many more days. With my 9 days food my total pack weight (including 600ml of water) came to less than 16kg (less than 35lbs). 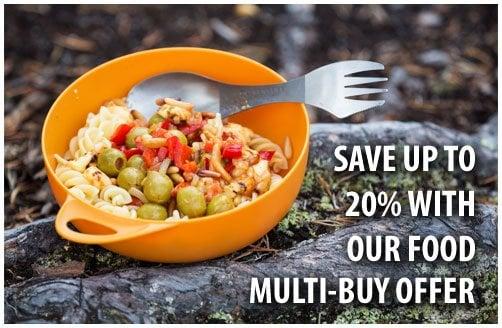