Extensively tested and reviewed by Cairngorm Treks throughout late summer and autumn 2018 in the Cairngorms and surrounding mountainous areas.

We take water treatment very seriously and have seen first-hand the effects that water born illnesses can have. On first inspection,the Sawyer Select Series appears to push further than any non-mechanical water filtration system we have used before, so we were eager to see how it faired against our usual choice. Made as three separate models, the S1, S2 and S3, all of which combine two key elements, the 0.1 Micron Absolute Sawyer Micro filter with a Select Foam Silicone Bottle and Reducer Cap. The higher the numbered model,the more contaminants it can remove effectively. All Select systems reduce chemicals down to 0.5 parts per billion (up to 40 times lower than the EPA’s maximum recommended level) and reduce pesticides down to 0.01 parts per billion (400 times lower than the EPA’s maximum). We received the S1 which fitted better for use within the UK and claims to remove bacteria, protozoa, chemicals and pesticides. It also has the longest lifespan with an estimated 1600 uses. The S2 and S3 will further remove heavy metals and viruses but with a reduction in the amount of uses. 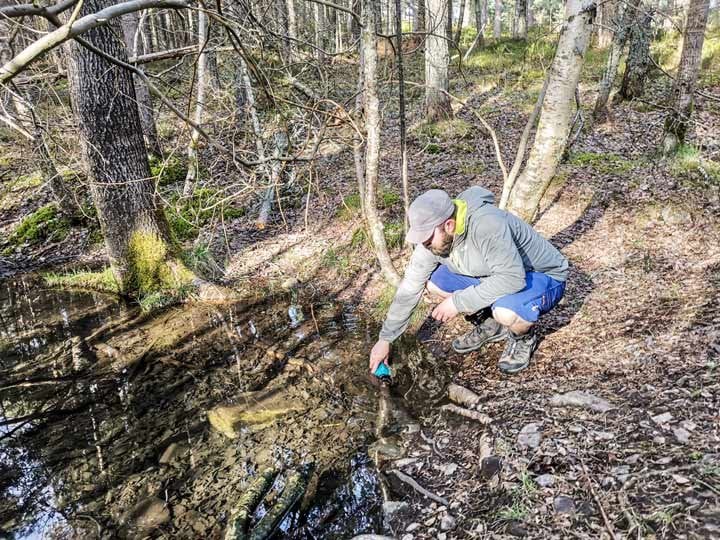 On receiving the S1 it’s apparent that this extra security comes at an increased bulk and weight. The 560ml silicon one bottle is quite large due to the dense foam that needs to be stored inside and the whole set up will set you back 284grams. The bottle is much thicker in material than other silicon bottles we have used previously. This is important, as the Select Series uses a 'squeeze' action to effectively work. Sawyer have a decent reputation for making well-built products and the S1 appears to follow suit. This is a very simple system to use with only two separate parts which screw together. It's worth mentioning that the 0.1 Micron Absolute Sawyer Micro filter can be used on its own to effectively filter most particulates or pathogens above 0.1 microns so is perfect whilst out in the high hills. It also attaches to most screw top bottles so can be a simple and lightweight option without the need to carry the large silicon bottle.

We found the S1 Select System with its ability to remove chemical and pesticides to be better suited for adventures at lower levels. Typically, in these areas suitable drinking water is harder to find. Due to the UK having fast amounts of rural land for use in forestry and farming, chemical and pesticides, as well as slower flowing water systems containing increased amounts of particles and plant life, meant the S1 fits the requirements for these locations.

For a system that appears to be of a simplistic design it will take a few attempts to master the process. One of the gripes we had with the Select Series is that the actual filling of the silicon bottle can be difficult. The neck of the bottle has quite a small entry and if the bottle could not be fully submerged it was easier to scoop and fill using a cup. Once you reach the fill mark you then attach the Micro Filter and squeeze the bottle “top and bottom” for 10 seconds to force the water through the foam. There are instructions written onto the side of the bottle which is a great addition especially if you haven’t used it for a while or if another member of the group would like to use it.You can drink straight from the bottle via the sports style cap or alternatively decant into a cup or water storage container. The flow is decent enough although it is easier to pour into a cup, as once the amount of water inside decreases it does take some force to squeeze the bottle and release the remaining fluid.

Sawyer do claim that the S1 will improve taste and odour. We can say, out of all the silicon filter systems we have used, the S1 is the best in terms of taste, with water tasting as it should…of nothing. After use it is clear that the foam inside cannot be completely dried out. But not to worry.Sawyer state the adsorption filtration technology within the foam is designed to both filter water as well as prevent growth. We decided to test this claim and left the bottle, damp, for two weeks without use. Following Sawyers guidelines, we filled the bottle with water at home and performed the same squeezing action as before for 3 minutes. We then released the water without the filter attached and a slightly discoloured fluid released. We then repeated this process with this time the waste water remaining clear. There is also a cleaning plunger and coupling to flush the Micro Filter so the whole system can be kept in great condition.

One area which has always been an issue with softer bottles is how well they survive life outdoors without succumbing to leaks. With the micro filter attached to the bottle the S1 stands quite tall.The section between the filter and foam is very flexible and there is a black cap which Sawyer advise shouldn’t be removed but unfortunately can pop off fairly easily.We instead preferred to keep the micro filter un-screwed and in a separate pocket whilst being carried.In terms of worries against potential punctures we have no damages to report with the thicker silicon bottle being very robust and dependable.

It needs to be noted than the Sawyer Select Series is unsuitable for use in minus temperatures. Any remaining moisture in the foam bottle and micro filter can lead to damage caused by freezing. 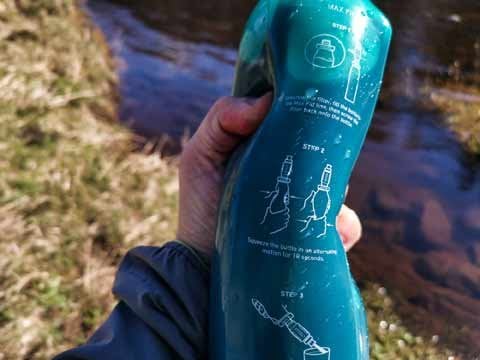 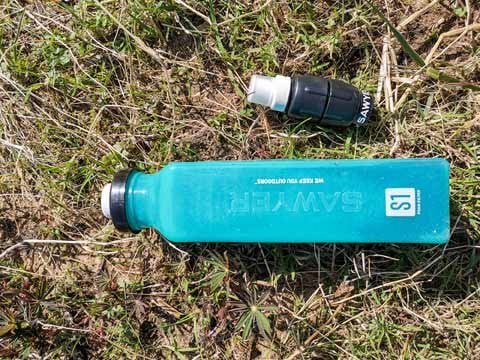 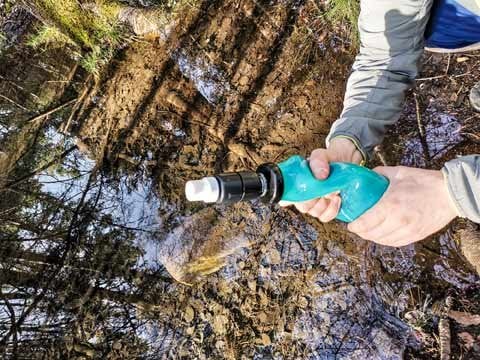 With the Sawyer Select S1 you actually have two filter systems in one. The 0.1 Micron Absolute Sawyer Micro filter is a lightweight choice for treatment of almost all contaminants found whilst travelling in the higher hills including most particulates,bacteria, and protozoa. Once lower down,attaching the micro filter to the foam silicone bottle and reducer cap gave us further protection against chemicals and pesticides. The S1 system is non-mechanical so can be relied upon for extended journeys without the need to carry additional tools. It’s also very tough due to the extra thickness of silicon but a bit of care is needed around the neck of the bottle. We mitigated this by carrying the bottle and filter separately whilst not in use. To fill can be tricky compared to other similar bottles but after a few uses you will master the process. We especially liked the adsorption filtration technology and cleaning process to keep the bottle in perfect working order and free from odour. In terms of taste, it’s one of the best silicon systems around. For many the S1 may be too large and a bit overkill for use in the UK mountains. This is then a choice better suited for anyone who spends a lot of time walking lower level, around areas where potential watercourses could contain chemicals and pesticides. If you are undertaking a long distance walk overseas and want that bit of extra protection you won’t go far wrong with the S1, although always seek advice for the area in which you intend to travel.

We take water treatment very seriously and have seen first-hand the effects that water born illnesses can have. On first inspection,the Sawyer Select Series appears to push further than any non-mechanical water filtration system we have used before, so we were eager to see how it faired against our usual choice. Made as three separate models, the S1, S2 and S3, all of which combine two key elements, the 0.1 Micron Absolute Sawyer Micro filter with a Select Foam Silicone Bottle and Reducer Cap. The higher the numbered model,the more contaminants it can remove effectively.