Who designed your gear?

Who fills the orders and who is on the other end of Facebook? Here’s a little insight into the Six Moon Designs team:

From his first hiking experience on the Appalachian Trail (AT) in high school to his southbound AT thru-hike in 1977 and Pacific Crest Trail (PCT) thru-hike in 2000, Ron Moak has been fascinated with lightweight gear.

As a college student, Ron started sewing his own equipment from the start: hand-made tarps, sleeping bags, jackets, bivy sacks and more put him ahead of the lightweight curve as his fully loaded pack weight hovered around 35 pounds instead of the normal 50 or 60 of most other backpackers at the time.

While he enjoyed the freedoms of light gear on the trail, the realization struck that others would too. There simply were no options for those wishing to lighten up. Months of planning and development resulted in the birth of Six Moon Designs.

The release of innovative products like the Gatewood Cape, a combination poncho/shelter system, and the Starlite Pack, a pioneering frame-less pack with a large carrying capacity, set the bar for affordable, durable and lightweight backpacking gear.

Ron continues to hike hundreds of miles every year, not only testing new ideas, but refining and improving Six Moon Designs’ products.

Brandon Moak has been an integral part of the Six Moon Designs team from an early age. From his first backpacking trip into Jefferson Park at the base of Mt. Jefferson at age six, to helping his dad in the early days of SMD seam seal tents and packs, Brandon truly knows the business inside and out.

He officially joined Six Moon Designs in 2007, and works with just about every aspect of the business. Processing and shipping orders, cutting patterns, sewing prototype packs and tents, repairing gear and hand-taping all Cuben Fiber shelters are just a few ways Brandon earns his “Jack of all Trades” title.

Fortunately he shares Ron’s love of backpacking; one of the early trips in the Moak household included hiking with his folks in 1997 on their AT 20-year reunion trip. The family hiked from Springer Mountain in Georgia to Hot Springs, North Carolina before hopping up north to hike from Hanover, New Hampshire to Katahdin in Maine in the midst of that year’s north-bounders. Sleeping in handmade sleeping bags and under a tarp of Ron’s design, Brandon was initiated into the thru-hiking lifestyle, although he found a lot of the thru-hikers to be just a little bit crazy.

He hiked from Kennedy Meadows in California to the Oregon border on his dad’s PCT thru-hike in 2000 before returning to high school in the fall, and carried one of the first prototype SMD packs on one of his own backpacking adventures in 2003.

Now that Brandon has his own family who enjoys the great outdoors as much as he does, they can be found hiking or camping throughout Oregon. One of his son’s favorite activities is running around barefoot and sitting in mud puddles, showing great potential as a future thru-hiker!

His favorite piece of gear at the moment is the SMD Traveler pack.

If you have called or emailed Six Moon Designs, it’s likely you have worked with Brandon. The father/son team not only work well together, they continue to role-model a successful family owned and operated business. 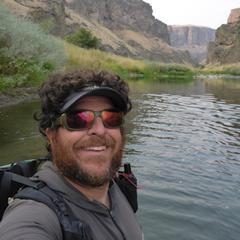 Whitney "Allgood" LaRuffa grew up in rural NH where he forged his love of the outdoors and activities such as fishing, skiing, and his true love backpacking. His time spent in Boy Scouts helped him hone his outdoor skills as he worked his way to becoming an Eagle Scout and fueled his passion for long distance hiking.

Allgood has clocked over 9,000 miles on long distance trail in the US. In 2014 he and two friends pioneered the first thru-hike of the Chinook Trail, a 330-mile route through the Columbia River Gorge in WA & OR. In 2016 Allgood left his career in the world of forest products and reconnected with rural America by successfully completing his thru-hike of the Continental Divide Trail from Mexico to Canada. Since this hike he has taken on a new career path that combines his love of sales and marketing with his love of backpacking and long-distance hiking. Shortly after joining Six Moon Designs, he thru-hiked the Oregon Desert Trail as a way to reconnect with the state he calls home and further familiarize himself with our gear. After walking 750 miles through punishing terrain, the Fusion 50 proved its worth, week after week carry any load needed to survive the desert, and withstanding constant abuse.

After many years on the trail, Allgood is a sought after speaker, educating people about responsible backcountry use with their dog, ultra-light hiking, thru-hikes for working stiffs and a vast variety of hiking related topics. Despite all this, Allgood is the sitting President of The American Long Distance Hiking Association-West (ALDHA-West) where he volunteers countless hours helping to be the voice of America’s long distance hiker.

You can find Allgood walking the trails around the US in need of a shower, a cold beer, and a pint of Salt & Straw Ice Cream. 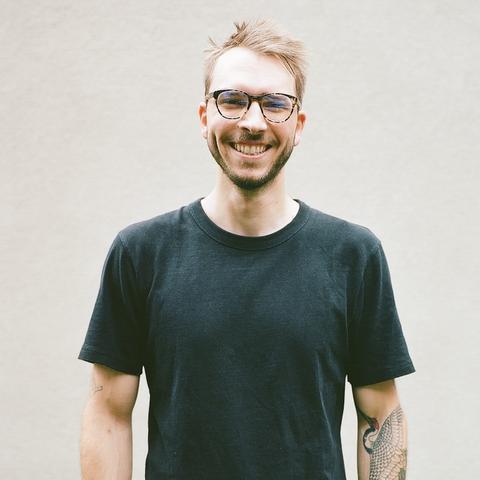 Graham was born in Memphis, raised in Nashville, and lived in Chattanooga. This Tennessee boy played in the great southern outdoors for 26 years before making his way to Oregon. He has sectioned hiked 500 miles of the PCT, spent summers climbing in Yosemite, surfed in Central America, and even has some first ascents in Grayson Highlands, VA. His experience in the outdoor industry made him the perfect candidate for our Customer Support Specialist.

Graham has a partner, Molly, and two pups, Marshall and Tucker. Molly is an artist and educator, while the dogs are full time moral supporters. The entire family often heads to the coast or Mt. Hood when escaping the city.

His tick list of trips for the rest of the year include the Timberline Trail, Loowit Loop Trail, and a bikepacking along the Deschutes River Trail. Graham can often be found carrying a trusty Gatewood Cape shelter on solo expeditions, and the Lunar Duo for trips that include the entire family.

With more miles under his four paws than most people will ever hike, Karluk holds the honor of being our Chief Morale Officer at Six Moon Designs. Besides being a designated field tester, ensuring our shelters have room for a human and a mutt, he is also the first smiling face to great you at our office.

Karluk’s hiking resume, like the rest of the crew is extensive, at age 1 he did his first long distance hike on the PCT, from there he was hooked. Karluk has completed the Tahoe Rim Trail, Chinook Trail, and numerous long hikes throughout the Cascades.

At age 10 ½ his long distance hiking days are slowing down, but he still loves to play in the snow, go for a weekend backing trip, or just chill with the SMD crew at trail events. 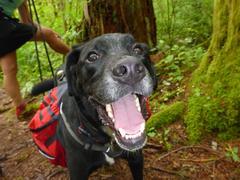