Cam Brensinger incorporated NEMO Equipment on April 24, 2002 with the intention of bringing high-level design and engineering to the outdoor industry. Only two months later, following his graduation, Cam moved NEMO into an historic mill in Nashua, NH. A quick drive from both New Hampshire’s White Mountains and the great design and business resources available from connections at RISD and MIT, Nashua was the perfect location to establish the company headquarters.

Much of the first year was spent learning how to sew and pattern and developing NEMO’s AirSupported Technology®. Tents were chosen as NEMO’s first product line because Cam saw the opportunity to bring significant new innovation to the market and knew that successfully revolutionizing tents would give NEMO the credibility to move into new product lines in the future.

The first AirSupported™ prototypes were completed. Early ideas explored the possibility of creating an entire tent shape from one compound curved airbeam and welding beams rather than sewing them. The very first successful airbeam Cam completed took over 1500 straight pins to hold together during sewing. It was a bear to construct, but proved the viability of the concept.

With working prototypes in hand, NEMO started developing its inaugural tent line and hired its first employees. NEMO began a history of doing specialized consulting work on the side to stimulate creativity and expand its expertise. One of the first projects was to engineer a new architecture for habitat modules for Lunar and Martian exploration. 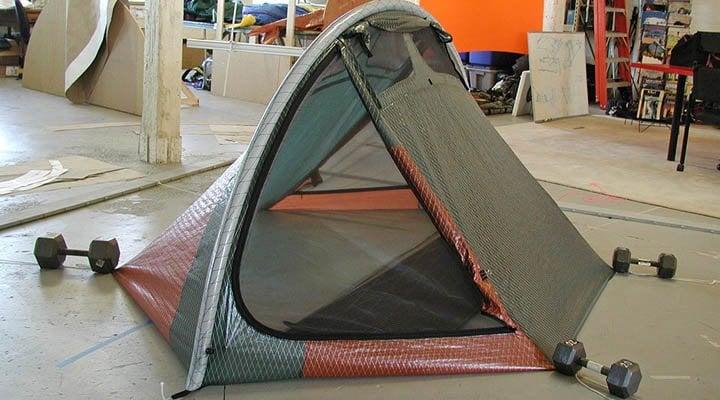 NEMO debuted its first generation of AirSupported Technology® and Extreme Conditions poled tents at the Summer Market Outdoor Retailer show in Salt Lake City, Utah in August of 2004, the biggest trade show for the outdoor industry in the US.

The tents instantly captured the attention of the industry and the media. NEMO was published in the “Best of Show” section of the OR Daily publication, Team NIKE/Balance Bar asked NEMO to co-develop a tent for adventure racing and officials from the ISPO BrandNew Award committee invited NEMO to submit for the winter of 2005.

NEMO finished designs of the first line of tents and begin a trial production.

NEMO was named the overall winner of the 2005 ISPO BrandNew Award, an award which recognizes the most innovative products in the outdoor industry from around the world. This important honor brought worldwide recognition to NEMO and marked the beginning of a very long series of awards, honors and media attention which has continued to this day.

Sales opened in May on the NEMO website for very limited quantities. NEMO tents began traveling the world on expeditions, adventure races, backpacking and cycling trips.

The size of the office space tripled to accommodate warehousing, rain chamber testing and photography.

Sales were expanded to include outdoor specialty shops across the country. Some of the original designs that debuted in 2004 continued their evolution, such as Morpho AR™, Tenshi™ and Gogo™. Many new models were also introduced as NEMO refined its skills in design, patternmaking and manufacturing. Investment allowed the company to assemble a top-notch team of designers and engineers, create a well-equipped lab for tent development and build relationships with the best textile and component companies in the industry.

In the summer, NEMO was approached by an elite group of Navy SEALs who were impressed by how lightweight, fast and small packing Gogo™ was, especially considering its disproportionately spacious interior. After successful testing by Naval Special Warfare of NEMO’s tents in the remote wilderness of Alaska, NEMO developed the Tanto and Gogo SE™ (similar to Gogo EX™ and Gogo LE). That was the beginning of NEMO Shield™. With some of the company’s friends and family deployed overseas, the company was and always will be proud to do their part to keep service members safe and well equipped.

The awards continued as Morpho AR™ was named “Coolest New Technology” by Backpacker Magazine and Tenshi™ received a B.I.G. award from Rock & Ice Magazine. Excitement about the brand grew as NEMO made its way into specialty shops across the country.

The design team focused on new designs for 2008 that would expand the company’s product line beyond mountaineering and adventure racing into backpacking, opening the door to a larger market.

NEMO created the Adventure Anywhere™ tagline which embodies the company’s idea that memorable and meaningful adventures can happen anywhere from the backyard to Mt. Everest.

NEMO pushed green thinking and sustainability to the top of the priority list and created the G.R.N.™ (Green Rethinking by NEMO) program. The company adopted Jenness Beach, a favorite local surf spot for company employees.

The company staff expanded to include dedicated positions for marketing, sales, customer service and graphic design. Design pervaded every level of the business; even the director of sales at the time had a degree in product design.

In 2009, Tenshi™ was named Editors’ Choice from Backcountry Magazine, and Losi 3P™ won the prestigious Gear of the Year award from Outside Magazine and Best All-Around 3 Person Tent from Backpacker. The Tuo™ sleeping pads and Fillo™ pillow hit the market, and the pillow was immediately a success.

As NEMO’s product line expanded beyond tents, it continued to thrive as a young company, committed to making the most innovative and high quality equipment for outdoor adventure and survival and committed to protecting the people and places that make adventure possible. The goal was now to create a complete line of tents and pads to serve all types of adventure.

NEMO now has 20 tent models, 4 sleeping pads, and 1 pillow on the market. NEMO sales in Japan are growing and distribution is expanded in Canada and Europe. The company sets up a program to take $2 from every prodeal sale and donate to 5 major non-profit organizations. Over $30,000 of tents and other items are donated for disaster in Haiti.

The Meta™ 2P tent wins the Backpacker Editors’ Choice award for defining a new level of comfort in the trekking pole category, cementing the design team’s commitment to use smart design and advanced materials to pack more livability into lightweight products rather than make products ultralight by making them smaller and depriving them of features, the approach of some competitors.

The State of New Hampshire presents NEMO with the Innovation Rocks! award.

The old offices in Nashua have gotten crowded and it’s time to fulfill a long-time wish to be closer to the seacoast and surfing. Beginning in June, the company undertakes the huge but exciting project of relocating to a charming old historic mill in downtown Dover, NH.

The new office is almost three times the size, with tall ceilings and big windows overlooking the Cocheco river. A woodshop is set up in the new office and employees work late nights painting and building all the furniture in the new space.

The design team is well underway with development of sleeping bags and the A.P.T. program is launched in the Fall to send hundreds of bags into the field for testing and evaluation.

We launch the Helio™ pressure shower, the first portable backcountry shower that doesn’t require hanging, and it goes on to win multiple awards.

The focus of the company this year is to bring the operations of the business up to the same level as the product design in order to really serve the customer and unleash the potential of the brand.

A limited edition of the new NEMO sleeping bags are made available online and some models sell out in short order. The new Spoon™ shaped sleeping bags bring a new approach to backpacking bags, offering extra space at the knees and elbows without giving up warmth or wasting ounces.

This year we officially launch sleeping bags with modest expectations, but our sales quadruple the initial forecast! We launch a line of synthetic bags using Stratoloft™ that incorporate a sleeping bag and pad, combining two pieces of the outdoor sleep system.

The team continues to earn attention for their designs, winning Backpacker’s Editor’s Choice for Nocturne, and National Geographic Adventure’s Gear of the Year, Gear Junkie’s Best of Show, and Outdoor Retailer’s Best of Show for Canon -40.

The Helio™ Pressure Shower continues to gain attention with a train of awards, including 50 Campfires’s Gear of the Year. We introduce the Galaxi™ to the NEMO family, offering a lightweight, budget-friendly shelter with innovations that continue to make it a popular product.

Ditto™ slim, the clever two-sided sleeve wallet, is the newest upcycled piece in the Ditto™ line, and we relaunched our entire line of sleeping pads with new colors, weights and features.

Through a partnership with AT Overland, we developed the JK Habitat™, an impressive rooftop system that replaces the stock top on a 4-door Jeep. It gains acclaim throughout the Overland community.

The company has outgrown its space again, and this time decides to move within the same refurbished textile mill, designing a new purpose-built space, with room for design collaboration. Desks are built from unneeded warehouse rack shelving, and each employee hand-paints murals on their desks. The awards keep coming, with Backpacker’s Editor’s Choice going to the Sonic™, as well as a train of other awards and recognitions.

We produce the first standing-height tent in our line-up, the Wagontop, as well as other camp gear for car camping, including the Puffin™ and Victory™ blankets.

Dagger™ series is introduced, and quickly becomes a favorite, offering the most livable space of comparable tents on the market, plus two doors and two vestibules.

NEMO designs a kit specifically targeted to bikepacking, introducing the Moonwalk™, Escape Pod™ bivy, and Apollo™. Escape Pod™ wins the international OutDoor Award. Tensor™ and Vector™ are introduced with game-changing Spaceframe™ Baffles, which provide insulation and stability. We also introduce the Nomad™, which proves that sleeping outside can be as comfortable as your bed at home.

We introduce the industry’s first integrated sheet to our sleeping bag line, which adds comfort and temperature regulation. We also introduce insulated quilted mattress tops on Concerto™ and Symphony™.

Cam is named as one of the 40 under 40, recognizing the innovation and leadership he has brought to the outdoor industry. Concerto™, Wagontop™, Escape™ Pod and Hornet™ continue to grab attention for their designs. Spoon™ Shaped bags continue to wildly exceed forecasts, but the NEMO team works hard to keep up with demand.

NEMO ventures into furniture with the successful launch of the Stargaze™ Recliner. The first ever swinging and reclining camp chair continues to solidify NEMO’s place in the market as a company that brings fresh thinking. Stargaze™ wins the prestigious Good Design Award, among others.

They celebrate their 15th Anniversary on April 24, and commemorate it with a Spoon Shaper kit, designed by Cam and assembled by the team.

NEMO is named one of New Hampshire’s Top 10 Best Places to Work, securing #8 in the state, and recognizing some of the company’s innovative policies, such as the GO FAR program, which sends employees on trips to use the gear.

The company continues to take a leadership role within the outdoor industry, and commits to double it’s efforts to toward sustainability. Cam is named one of the outdoors Best & Brightest, and the company sets its sites on the next exciting launch.